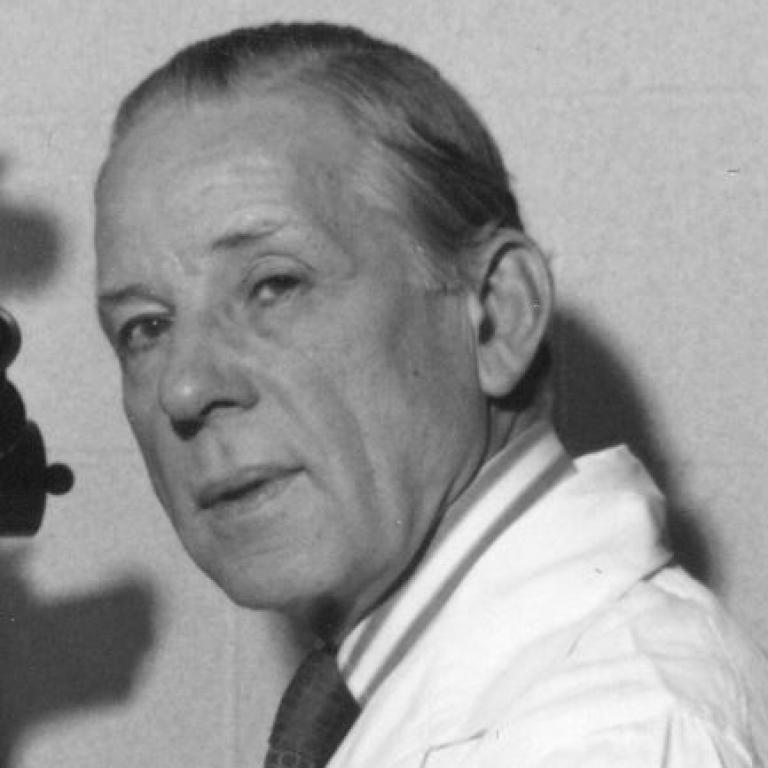 Dr. Armand Frappier was born in Salaberry-de-Valleyfield in 1904. A graduate in medicine from the Université de Montréal in 1930 and the recipient of a licence in science from the same university the next year, Armand Frappier received a scholarship from the Rockefeller Foundation, allowing him to study at the University of Rochester in New York and at the public health laboratories of the State of New York and in New York City. In 1932 and 1937, he pursued post-graduate studies at the Institut Pasteur in Paris, where he was the student of the great discoverers Calmette, Guérin, Nègre and Ramon.

A research pioneer in microbiology and preventive medicine, Armand Frappier taught in those fields for more than 35 years at the Université de Montréal. He was the founder of Montréal’s Hôpital Saint-Luc laboratories and their director from 1925 to 1943. In 1938, he founded a microbiology and public health institute, the Institut de microbiologie et d’hygiène de Montréal, and would serve as its director for 38 years. After his retirement in 1975, the institute would become the Institut Armand-Frappier Research Centre, a branch of the Université du Québec. He was also the founder of the Université de Montréal’s School of Hygiene and spent 20 years as its dean, from 1945 to 1965. Beginning in 1978, he was a consultant to the Institut Armand-Frappier Research Centre, after having been the advisor to his successor.

Through his experimental research work, which he began in 1934, Armand Frappier was a champion of the rational application of tuberculosis vaccinations using the BCG vaccine in Canada and around the world.

In addition to his scientific and humanitarian causes, Dr. Frappier also created a bio-industrial centre at the institute, rendering Quebec self-sufficient in developing and producing vaccines and diagnostic products and services. This research centre, which has labs in 22 buildings, brings together research, innovation and training facilities on a single campus for a core of experts and consultants, and over 500 members now work there. Eminent scientists from around the world in different fields of health, including a number of Nobel Prize winners, have visited and taught at the institute. In 1979, Dr. Frappier was awarded the Prix Marie-Victorin for his body of work. He also holds honorary doctorates from the Université de Montréal, Université Laval, McGill University, Université de Paris, the University of Warsaw and the Université du Québec. In 1969, Dr. Frappier became a Companion of the Order of Canada.

Dr. Armand Frappier died in 1991. He was inducted into the Academy of Great Montrealers in the Scientific category in 1978 and was named a Commander of the Ordre de Montréal in 2016.